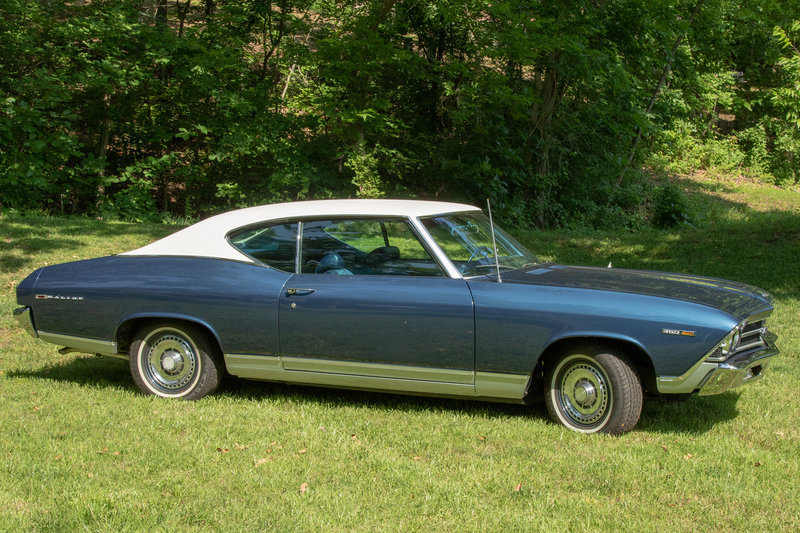 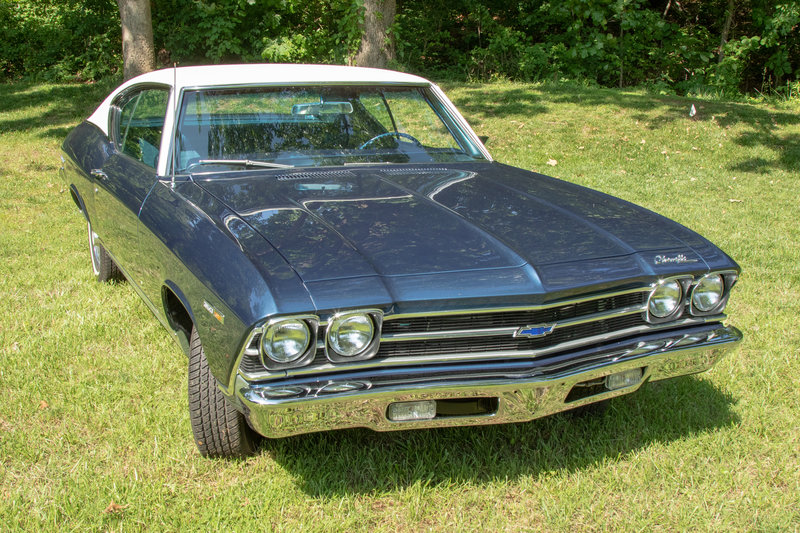 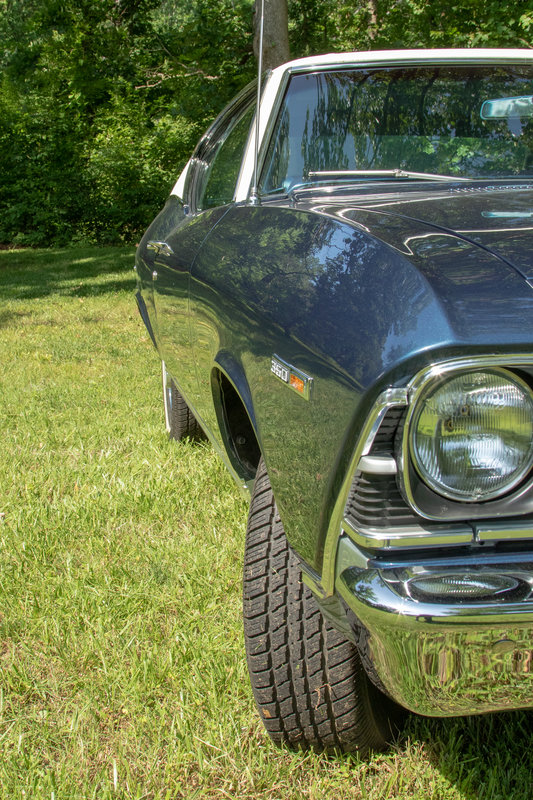 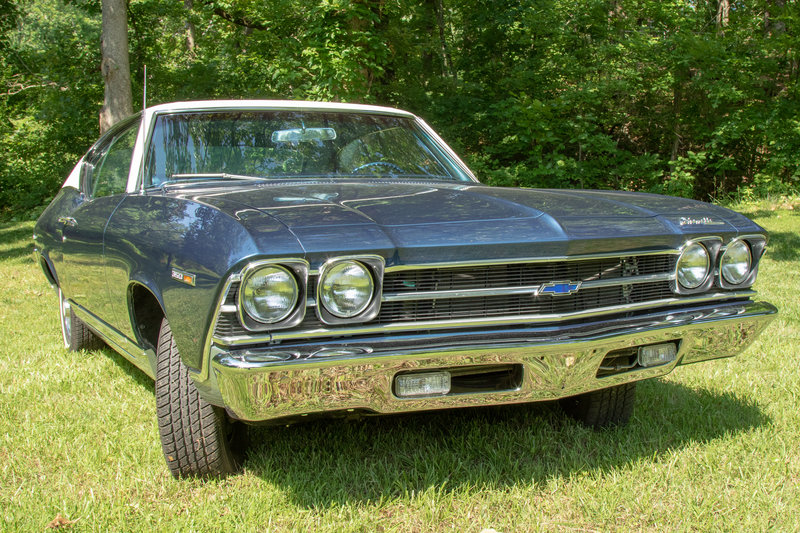 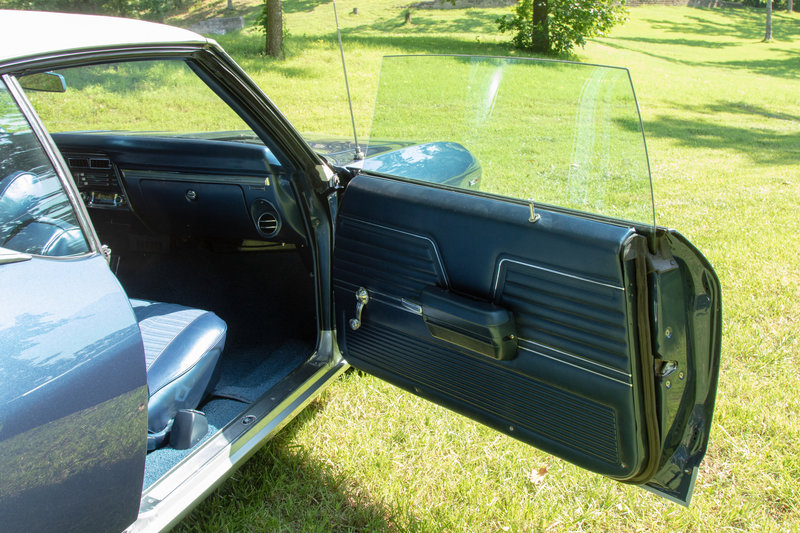 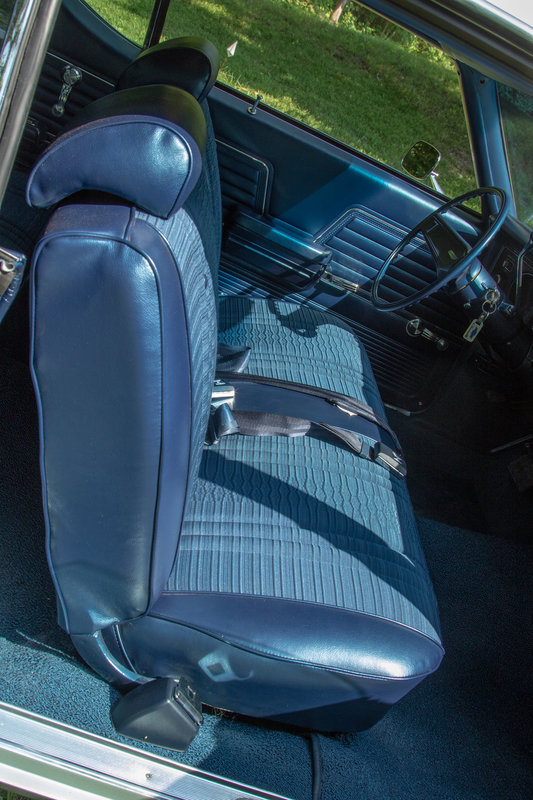 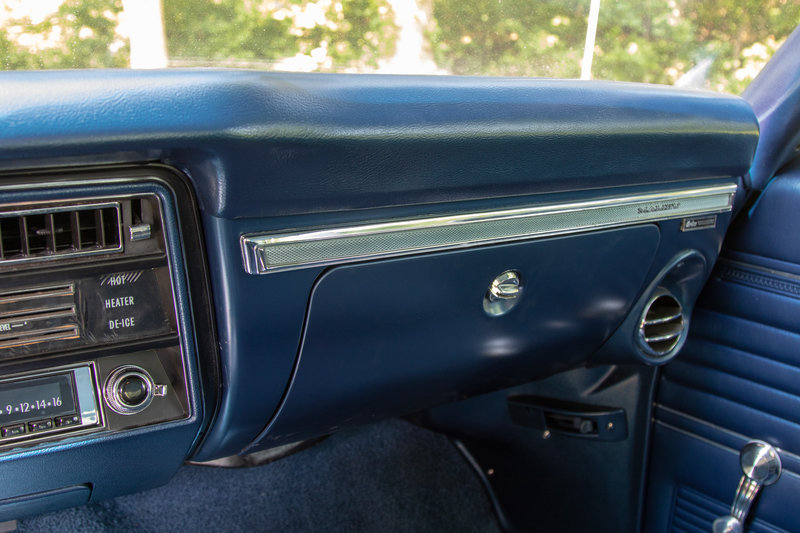 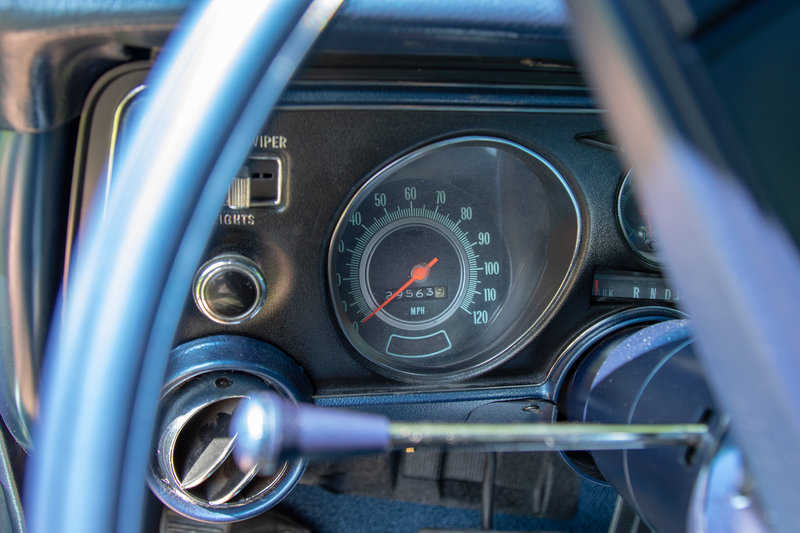 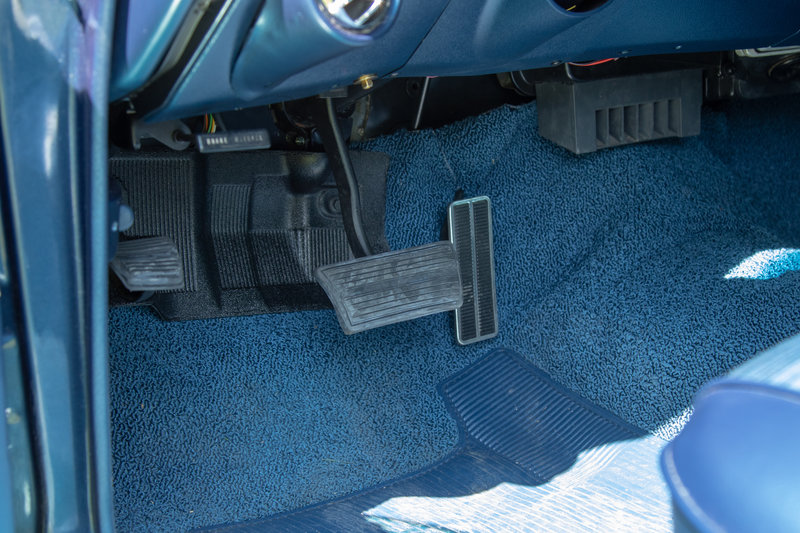 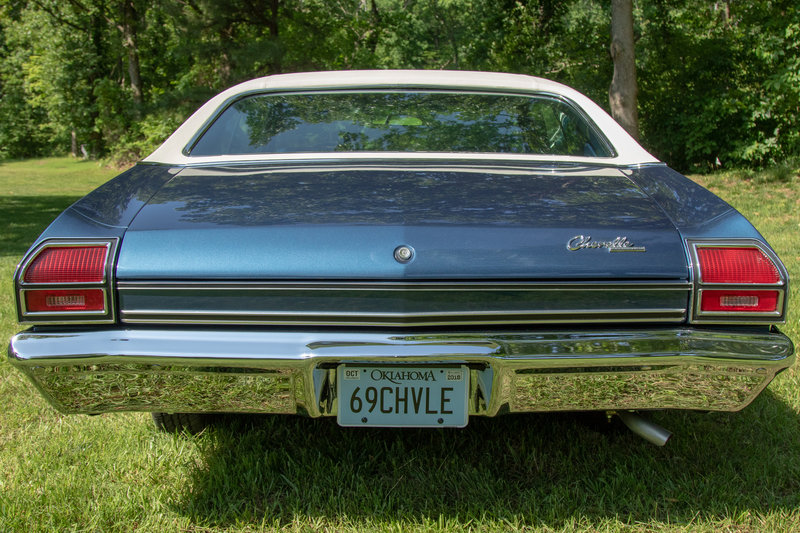 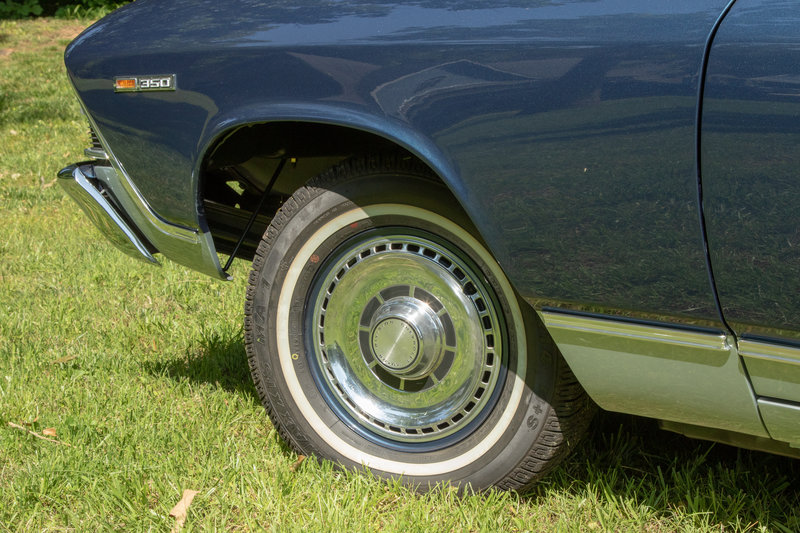 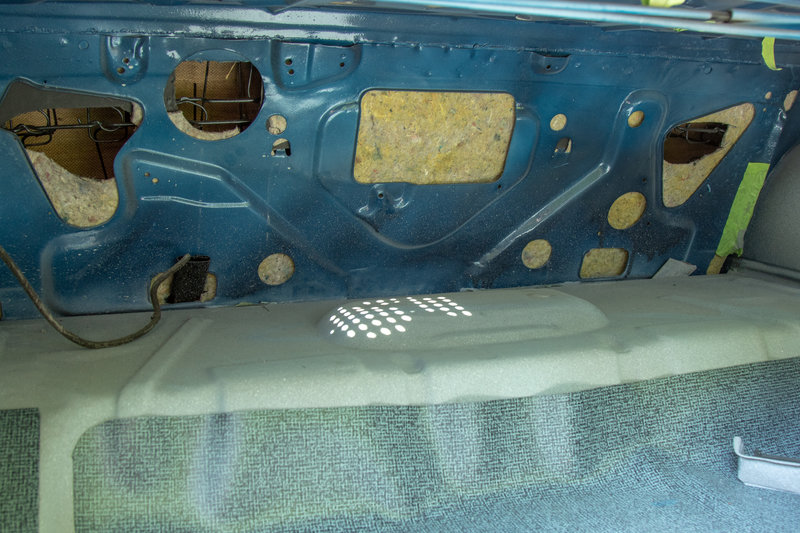 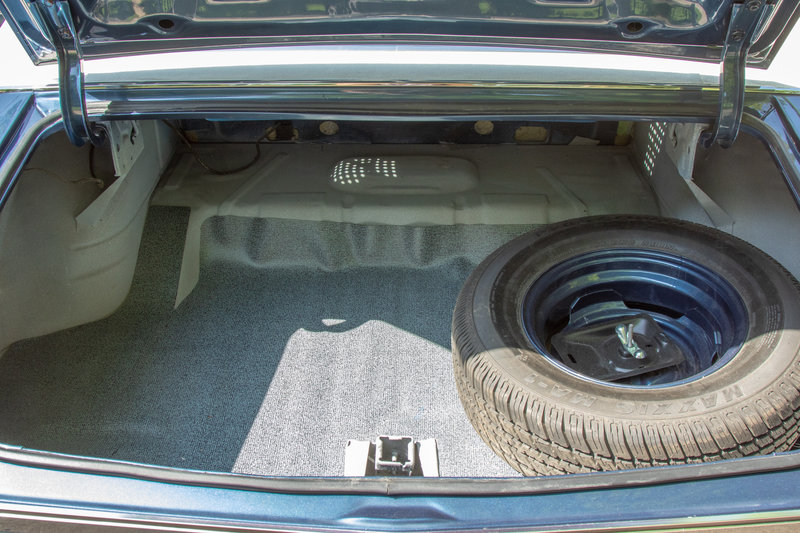 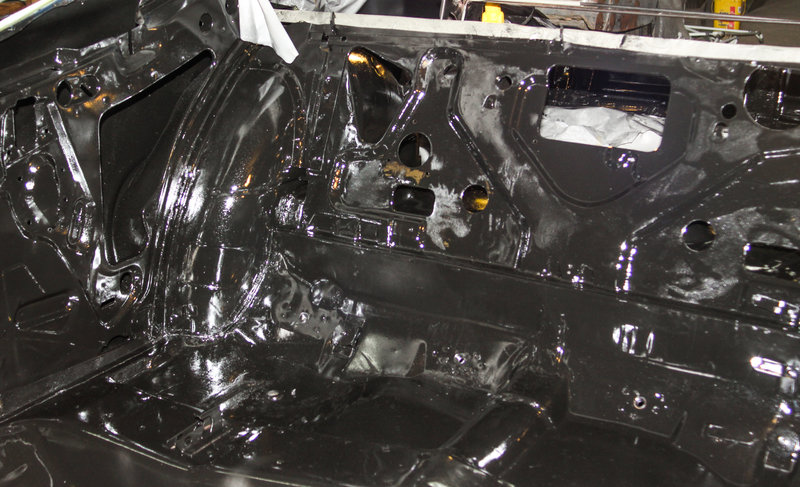 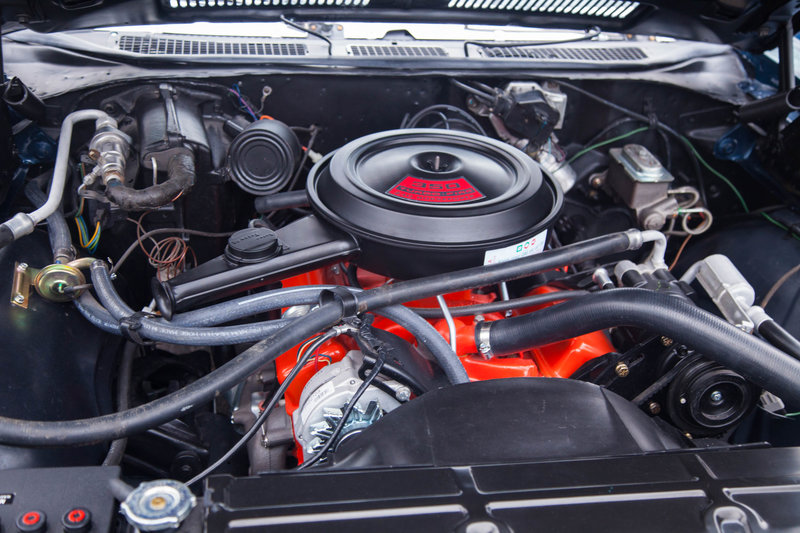 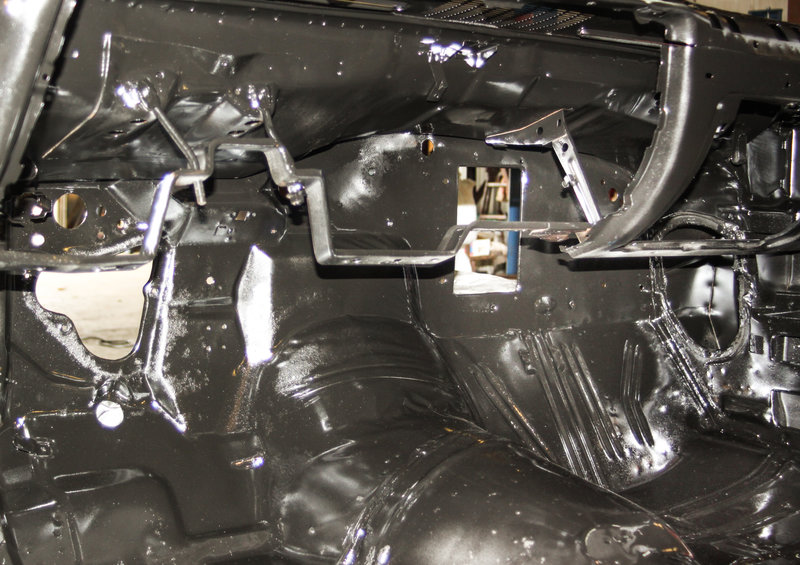 Completely restored to original condition,
this car looks as it did when it rolled off
the assembly line in February 1969.

Every component was removed during the 5-year
restoration, cleaned, and treated to prevent
rust - even in the most inaccessible areas.
All new brake and fuel lines were routed
through the frame and secured with metal
clips appropriate to the year of manufacture.

The seats were recovered with original, new-
on-shelf, Rior fabric as was delivered in the
original car. Carpet, under-padding, etc were
replaced with new reproductions.

The body was cleaned and all imperfections
were removed by straightening - not with body
filler. The car was painted in the original
Dark Blue Metallic using urethane-based paint
which was cured in a high-temperature booth
at A-1 Auto in Broken Arrow. A Parchment
White vinyl top was added to complete the
original exterior.

Great attention was given to details such as
using metal studs to secure the aluminum
brightwork (instead of screws), new-on-shelf
hubcaps which match the originals, seatbelts,
and a 'restomod' AM/FM radio which matches
the look of the original radio with new
electronics.

Sadly, the original motor was gone before I
got this car. The motor now in the car is
technically 'numbers correct' having the
correct casting numbers and date stamps
appropriate to the delivery of the car. The
engine is a 250hp, two-barrel carbureted, 350
V8. All mechanical aspects of the car are in
perfect operating condition with the
exception of the clock, and I have a new
clock waiting for installation.

I purchased the car in December, 2010. The
prior owner (copy of title available) had
owned the car since 1987. Only the name of
the owner before him is known. Full details
can be provided. Clean Oklahoma title.

Restoration was completed in February, 2017.
I took the car to the annual Starbird car
show in Tulsa that month and took first place
in the 1965-1969 Original Restoration class.
The car has been to several smaller shows
since then and has always taken first place
in class.

I spent way too much money (several times the
asking price) having this car professionally
restored, which is the reason for selling -
keeping the peace with my wife. I have
documentation of all the work done on the car
including money spent and many before-and-
after pictures. This car will be a fantastic
addition to any collection dedicated to
original restorations. It is truly one of
those cars you must see to appreciate.

If interested in talking about this car,
contact me through the site. Car is available
for viewing (and careful driving :-)) if
you're in the Broken Arrow, OK area.