Description:
This model is a driver quality example dressed in a turquoise exterior paint and a black interior under a black convertible top. This Ramble is powered by a an 232c.i. inline 6-cylinder engine mated to an automatic transmission.

The Rambler American is a compact car that was manufactured by the American Motors Corporation (AMC) between 1958 and 1969. The American was the second incarnation of AMC forerunner Nash Motors' compact Rambler that was introduced in 1950 and marketed after the merger with Hudson Motors under both Nash and marques during the 1954 and 1955 model years.

The Rambler American can be classified into three distinct model year generations: 1958–1960, 1961–1963, and 1964 until 1969. During the entire length of its production, the car was sold under the Rambler brand and in 1969 became the last Rambler-named automobile marketed in the Canadian and United States markets.

The compact Rambler American was most often the lowest priced car built in the U.S. It was popular for its economy in ownership, as was proven by numerous Mobilgas Economy Run championships. After an optional second-generation AMC V8 engine was added in late 1966, the cars also became known as a powerful compact “muscle” model that included the 390 cu in (6.4 L) version built in conjunction with Hurst Performance, the 1969 SC/Rambler.

A special youth-oriented concept car, the 1964 Rambler Tarpon, was built on a Rambler American platform that foretold the fastback design of the 1965 Rambler Marlin, as well as future trends in sporty-type pony cars, including the 1968 AMC Javelin.

As the automobile marketplace in the U.S. was moving away from economy towards performance and luxury vehicles, American Motors began removing the historic Rambler name from its larger models. The American and Classic models retained their economy-car marketing image, and their traditional nameplate. To cement this image, a Rambler American was again the overall winner in the Mobil Economy Run. The mid-trim level 330 model was dropped, leaving the top 440 and base 220 models in the lineup for 1966. The top-of-the-line model, available only as a two-door hardtop, had its name changed from 440-H to Rogue.

The American models were facelifted for the 1966 model year, with more squared-off front and rear styling. The front of the car was extended three inches (76 mm), which allowed the optional air conditioning to be installed with the new 199 and 232 in-line six-cylinder engines, which were longer than the previous 195.6 versions.

A completely new 290 cu in (4.8 L) "Typhoon" V8 engine was developed by AMC; it was introduced in the special mid-1966 Rogue model. Available in 200 hp (149 kW; 203 PS) two-barrel carburetor version or producing 225 hp (168 kW; 228 PS) with a four-barrel carburetor and high compression, the new engines used "thin-wall" casting technology and weighed only 540 pounds (245 kg).[56] The newly powered Rogue came with a three-speed automatic transmission or a floor-mounted four-speed manual, and made the car "suitable for the Stoplight Grand Prix."[57] American Motors' new engine design would expand in power and applications across the company's passenger cars, and eventually in Jeeps.[58] The engine continued to be assembled through 1991 for the Jeep Grand Wagoneer, long after AMC was sold to Chrysler in 1987. 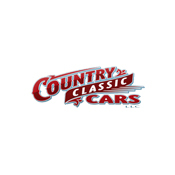 Country Classic Cars started as a weekend hobby for a Midwest farmer. He soon found his passion for classic cars and trucks turn into a growing business. The owner worked as a mechanic for several years before becoming a farmer. Not only did he have the knowledge but also the desire to take classic cars, fix them, and sell them to others that dreamed of owning a classic but did not have the time or expertise to make it happen. Once this idea caught on, Country Classic Cars realized that this passion had a potential to become a way of life. The next step was obvious; when a piece of land along Interstate 55, just off the path of Historic Route 66 became available, Country Classic Cars made the move by acquiring the land which has plenty of room for not only a large display of classic cars and trucks, but also a garage/service area, inside showroom, and a historic gift shop
Share this listing: Report This Ad